According to the results of an independent rating research within the framework of the project UKRAINIAN PEOPLE AWARD-2020, the ANANTAVATI® brand became the winner in the nomination:

«Vitamins and remedies (supplements) for the nervous system 2020 - ANANTAVATI®»

UKRAINIAN PEOPLE AWARD – All-Ukrainian national project which main purpose is to determine the best goods and services among those presented on the Ukrainian market. The project is based on the preferences of a fair and harsh jury – Ukrainian consumers.

Generally speaking, everyone can declare himself the best, but only the winner of the Ukrainian People Award, elected by Ukrainian consumers, can become a real market leader and receive national recognition.

We are proud that ANANTAVATI® which is a unique anti-stress remedy is the favorite brand of Ukrainian consumers among the remedies for the nervous system! 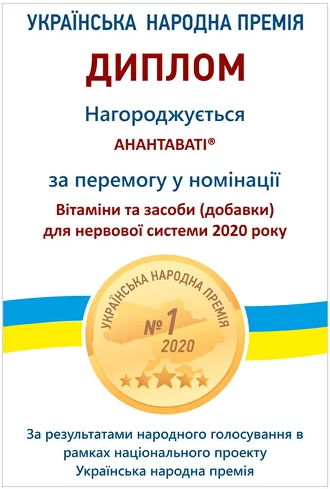